Despite the use of the Youth Ordinance Bill to enforce curfews for minors and regulate the use of the internet, young people continue to fight for their own freedom through underground methods. One such group calls themselves Surat.

They have decided to take on Fumito Nanahara, a man who has great influence on the political world, and basically controls Tokyo with an iron fist. While using the internet as a weapon to discover more information about Fumito, they learn about "Tower", the secret organization behind Fumito which engages in human experimentation.When members of Surat attempt to set up an ambush in the subway to expose the truth behind "Tower", mysterious creatures suddenly appear and attack the passengers. During this crisis, Saya appears - a young girl who uses a Japanese blade to slay the Old Ones. The same Saya who lost everything dear to her in that horrifying incident in Ukishima Province. What sort of "experiment" is Fumito and "Tower" trying to conduct using the Old Ones? And can Saya finally deliver vengeance to Fumito? 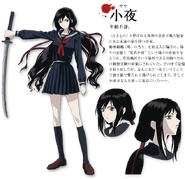 Saya's appearance in the movie 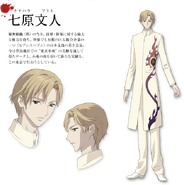 Fumito's appearance in the movie

Add a photo to this gallery
Retrieved from "https://bloodc.fandom.com/wiki/Blood-C:_The_Last_Dark?oldid=6462"
Community content is available under CC-BY-SA unless otherwise noted.